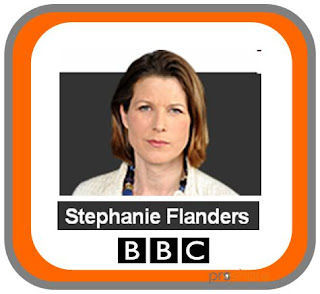 The time for reaching a Greek debt deal is fast running out. That's one thing everyone can agree on here in Davos.

But what's less often noticed is that the balance of power around the negotiating table has also shifted lately; against the Eurozone institutions and politicians who most want to see a deal, and in favour of the Greeks themselves.

There are three reasons for this shift.
First, the need for more debt relief for Greece has become even more blindingly apparent.
Second, it has become clear that the official sector has to contribute if it's going to happen politely.
Finally, and more quietly, the Greek government has slashed its way to a primary budget surplus: as of now it is only borrowing money to pay off the debt. That could change things quite a bit.

Skyrocketing cost
Let me say a bit more about all of this. To see the need for greater debt relief, you need only look at the skyrocketing cost of servicing Greek debt. For all the "cheap" loans flowing to Greece from the Europeans and the IMF, the Greek government had to pay 23% more in debt interest in 2011 than in 2010.

Forecasts for its total debt relative to GDP get revised up almost every week and look less and less plausible.

The second new reality follows directly from the first. To put it bluntly, the truth is slowly dawning that no "voluntary" arrangement to cut the value of debt held by the private sector is going to provide Greece with enough relief.

Either the haircut for the private sector has to be a lot more than 50%, in which case it is very unlikely to be classed as "voluntary" by any stretch of the meaning of that word, or the stock of debt that's part of the deal needs to grow to include bonds held by public sector institutions like the ECB, which has bought around €40bn (£34bn; $53bn) of them.

As we have seen this week, Germany and the ECB are still dead set against this.
They say it might not be legal under the Treaty. They also think, reasonably enough, that there's an important principle at stake. If the official sector runs into a burning building when the private sector are all running out, the rescuers shouldn't be the ones to get burned.

But, you might say, that is why firemen have trouble getting insurance. It's a dangerous line of work no matter how much protective clothing you have.

Maybe it's not fair, but if the Germans want their first - and supposedly last - foray into "private sector involvement" to happen in an orderly way, it's looking as though they're going to have to swallow some losses for the ECB, or find some other way for the public sector to be involved.

Ambitious debt reduction
You might ask why any of this strengthened the hands of the Greeks, as I suggested at the start.
One reason is that the IMF is now firmly behind a more ambitious debt reduction. As we have seen this week, the IMF's managing director is also on Greece's side pushing for public sector involvement in the deal.

But another key factor, which few seem to have tumbled to, is that the costs to Greece of the government walking away from the table and suffering a disorderly default have fallen noticeably since last summer, at least when compared to any plausible (orderly) alternative.
The key to this is to look at the Greek government's budget outturns for the second half of 2011, published earlier this month.

As Graham Turner of GFC Economics has noted, these show a real step-change in the effort to cut spending and actually collect more Greek taxes.

You'll remember it was the Greeks' inability to get a grip on spending or taxes in the first half of 2011 that caused the big overshoot in their deficit, and such paroxysms in Berlin and Brussels (not to mention the markets).

The primary budget - excluding debt interest payments - for the first 6 months of the year had a deficit of €5.1bn, which was almost exactly the same as the year before.
Tax revenues had fallen by more than 5%, year-on-year, and non-interest spending had risen by more than 8%.

That was when the fiscal equivalent of Eurozone special forces parachuted into Athens as part of the second rescue package, with EU tax officials seconded to the Greek finance ministry. If the numbers are to be believed, they have made a massive difference.

In the second half of 2011 the latest figures show tax revenues up 1.4% year on year and non-interest spending falling by an impressive 7.4%. As a result, the Greeks seem to have managed a 1.8bn euro primary surplus in that period: the overall deficit was still massive, but all that borrowing was going toward debt interest, not domestic spending.
Less terrifying  Here's why this matters: traditionally, countries that need a massive write-down of debt will try very hard to avoid a disorderly default when they are still borrowing from the markets to fund basic government services.

However, the balance of arguments shifts a bit, when they "only" need to raise money in the markets to service their debt. Further budget cuts, simply to pay investors their interest, are harder to defend politically. And the immediate fallout for basic services of losing access to the markets gets slightly less terrifying.

Don't get me wrong. If it happens, as so many people now expect, a full-blown Greek default would still be horrendous for its financial system, and its domestic economy - at least in the short run. (That's quite apart from the impact on its eurozone neighbours. I'm only thinking here about the implications for Greece.)

For all that, the balance of costs and benefits to Greece relative to the current path is not what it was years ago, when it's primary deficit was 5% or 6% of GDP.
And, let's face it, the stick-with-it scenario is not looking so hot either.
Earlier this week, the IMF's chief economist, Olivier Blanchard, spoke eloquently about the dangers of the crisis.

He noted that one of the more pernicious things about the current situation was that countries under pressure were doing the "right thing" in terms of budget cuts, but were not getting rewarded for it, either by the markets or by their supposed eurozone allies. That's more than unfair; it's dangerous.
The irony is that Germany's very emphasis on putting fiscal tightening before everything else has actually now put Greece in a stronger position to default.

If that is not what Angela Merkel intended to happen, she will almost certainly need to give some ground in these debt negotiations to prevent it. Assuming it is not already too late.