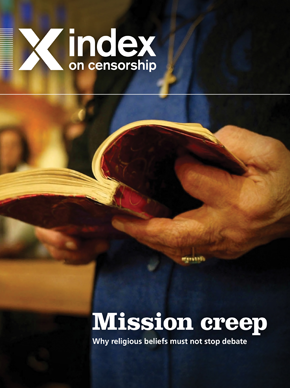 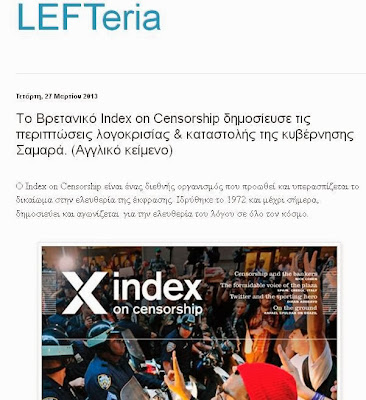 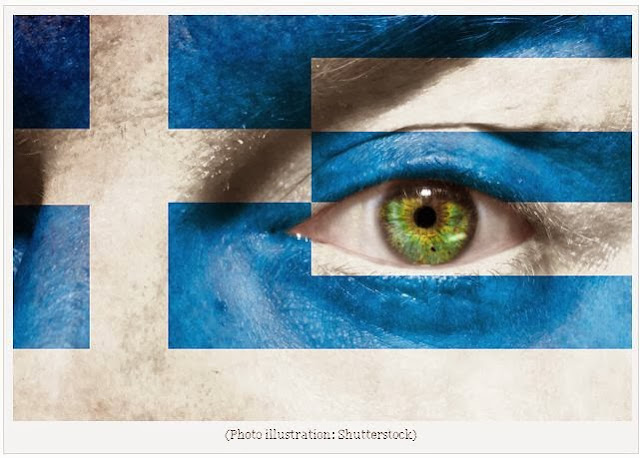 As Greece prepares to take n the presidency of the Council of the European Union on January 1, the country continues to grapple with the free expression fallout from its financial crisis.


The Greek constitution protects freedom of expression in Article 14, a very lengthy provision detailing the rights and restrictions. As set in the first paragraph of Art. 14 “every person may express and propagate his thoughts orally, in writing and through the press in compliance with the laws of the State”.


Aside from domestic legislation, Greece cooperates with a number of international organizations and is a contracting party to treaties related to freedom of expression, civil/political rights and access to information, for instance the European Convention on Human Rights and the International Convention on the Elimination of All Forms of Racial Discrimination.


However, the heavy austerity measures imposed since 2010, after the fiscal agreements between the Greek government and the “troika” (IMF, European Commission, European Central Bank), resulted in serious violations of human rights including freedom of speech. Cuts in government spending forced impoverishment upon large segments of society and came with a heavy price of social exclusion and marginalization.


Reports from various intergovernmental organizations, NGOs and civil society groups are raising alarms about policies followed by the Greek state. Human rights such as free expression, free thought, free movement, right to work, equal treatment, access to decision-making and right to protest are being systematically attacked.


On 16 April 2013, Nils Muižnieks, the  Commissioner  for Human Rights of the Council of Europe, published a report on human rights issues. Muiznieks urged the Greek government to use all legal instruments, domestic and international, to combat hate speech and racist crime, largely attributed to the rise of the neo-nazi party Golden Dawn.

Looking at the evidence coming from official institutions and NGOs, the “pillar” of government accountability is characterized by corruption and maladministration.


Although “micro-corruption” is less of a problem, mainly due to economic problems, Greece is still perceived as the most corrupt nation in the European Union. In a total of 177 countries worldwide, Greece ranks 80, although some progress has been made from last year.


According to the 2012 annual report of the Greek Ombudsman, a constitutionally sanctioned independent authority investigating administrative actions regarding personal rights, “the call for social justice is the main feature of people’s complaints, reflecting the existing social fatigue.”


After evaluating the significant increase in the number of complaints, the Ombudsman reported that citizen encounters with the administration have intensified, while the explosive social conditions have lead to greater loss in human rights protection.


Greece’s dramatic fall in the ranking of 2013 World Press Freedom Index, is evidence of the oppressive environment journalism is practised. Since 2008, Greece has fallen from 31 place to 84.


In the past three years, mainstream media have been experiencing a significant deterioration in their “watchdog’ role, as a result of the crisis and of long-term weaknesses and practices.


The Greek media market is shaped by media groups owned by magnates, shipowners and big contractors. Having vested interests in profitable industries, these tycoons have been working closely with every regime to ensure their dominance at any cost.


In additiona, the financial crisis has led to closures and severe cutbacks at print and broadcast outlets while hindering effective reporting and quality journalism.


Ιndex on Censorship has thoroughly reported on politically motivated firings or suspensions at both state and private media.


The case of investigative journalist Kostas Vaxevanis is an indicative example of the governments’ approach to press freedom. Vaxevanis was arrested and prosecuted after publishing a list of more than 2,000 suspected tax evaders, the so called “Lagarde list”.


Moreover, Reporters Without Borders, in a special investigation report dating from September 2011, suggested that a crisis of confidence in journalism has resulted to a devaluation process of the profession. RWB highlighted the risks entailed in reporting at street demonstrations and violent clashes with the police: “Working conditions during demonstrations are nowadays rather like in a warzone”.


During the crisis, the need for more investigative reporting led several bloggers and online activists to form independent media collectives.


While mainstream media failed to report on the social struggle, these collectives managed to report complaints and publicise dissent. But not without a cost. On April 11 2013, Indymedia, an anti-authoritarian internet collective, had its plug pulled by the government for reporting on police brutality cases and exposing the deeds of neo-fascist Golden Dawn.


In late September 2012, the case of Elder Pastitsios showed that online satire cannot be tolerated. A 27-year-old man, who published a Facebook post mocking a well known Orthodox monk, was arrested on charges of malicious blasphemy and religious insult.


It’s perhaps the first time an internet company disclosed information to the Greek authorities in order to identify an individual accused of an alleged offense relating to religioussatire.


LGBTI: Living in a conservative society


Several incidents of state censorship and social discrimination on the grounds of sexual orientation illustrate the mentality of an oppressive society.


According to IGAL’s Annual Review Greece ranks 25 among 49 European countries. A wave of violence has been recorded against LGBTI activists and supporters, from conservatives, extremists and supporters of the Golden Dawn party.


In 2013, (ex) Greek State television ERT decided to censor a kissing scene between men from the TV drama Downton Abbey. Following the reactions from the LGBTI community and the intervention of Greek Ombudsman, the broadcaster issued a communiqué apologizing for the “unfortunate decision”.


It is worth noting that Greece has been found violating the European Convention of Human Rights, regarding its decision to exclude same sex couples from the institution of civil partnership. Although the government plans to extend the legislation to same sex couples, there are continuing pressures from conservatives as well as from the Church.


The impact of orthodox religion to Greek society is so strong that sometimes it can be an obstacle in the perception of artistic attempts. Recently, it lead to the intimidation and persecution of a theatrical play whereby homosexuality was used as a narrative technique.


Human rights abuses against immigrants, asylum seekers and other minorities in Greece have escalated dramatically. The approach of the Greek government — together with the racist attacks organized by Golden Dawn — suggests a police-regime with almost no respect to human life.


Under stricter requirements of acquiring citizenship and with an inadequate asylum system, immigrants and refugees are “trapped” in a country with substandard detention conditions at camps and prisons. Despite reported improvements at the appeal level of the asylum procedures, Greece has made very little progress in establishing a fair and humane system.


Police mistreatment and xenophobic behaviuor from the authorities is a key factor in depriving immigrants and refugees of basic human rights. Allegations of torture and ill-treatment have been largely reported and condemned by international courts and human rights organizations.


Although the anti-racism bill, which is under discussion in Parliament, holds provisions/sanctions for hate speech and incitement to violence, it does not address problems regarding the reporting of racist incidents and the prosecution of racist violence.


Last, but not least, the fundamental right to education for all citizens is not yet granted. The country has been found discriminating against Roma children by segregating them in separate schools.


The harsh economic conditions imposed upon Greek population seem to affect women and children more than others.


Even though the number of complaints from women is consistently low, both at a national and European level, documented domestic violence has increased by 47% in recent months. Verbal abuse, economic blackmail and sexual humiliation are among the most common types of violence against women.


Unemployment and precarious employment affect women more than any other social group. There are documented cases of work discrimination during pregnancy and maternity.


Unfortunately, marginalization of Greek women does not stop there. The unprecedented shocking story of 31 women, forcibly tested for HIV and prosecuted for intentionally causing grievous bodily harm, is strong evidence of a police-state that shows no respect to medical confidentiality and above all human dignity. Amnesty International and Human Rights Watch have accused Greeceof violating human rights in the case.


The state of children in Greece is in no better position, in fact it is in a critical status. Almost 600.000 are living below the poverty line, while half of them lack the basic nutritional needs. Things are far worse, when it comes to refugees and asylum seekers: both women and children have been victims of xenophobic violence.

ROAR (US)."Greece, the real criminals live in other Villas — not the one of Amalias".
http://lefteria-news.blogspot.gr/2013/01/in-roargreece-real-criminals-live-in.html