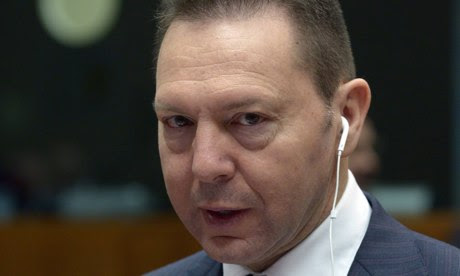 European finance ministers meeting in Brussels on Monday are due to express disquiet over the resistance Athens is displaying to adopting reforms, as the Greek government weighs up the cost of a court ruling reversing wage cuts for security forces agreed under the country's bailout.


The Greek economy minister, Yannis Stournaras, was steeling himself for a dressing down – even though he is chairing the session in Greece's capacity as current EU president – amid evidence of spiralling tensions between the debt-crippled nation and its international creditors.


The EU, European Central Bank and International Monetary Fund, which have already postponed completing their latest review of the economy, signalled that rescue funds will not be forthcoming if Greece fails to implement improved competition rules. Prime minister Antonis Samaras's increasingly beleaguered administration has indicated it will be unable to enforce all of the reforms, going so far as to propose alternatives at the weekend.


The stand-off comes as Greece's highest legal body, the court of state, challenged the country's fragile economic recovery by demanding that the military and police be reimbursed for cuts dictated when Athens signed up to a second EU-IMF rescue programme in 2012.
The ruling, which was leaked before being officially announced, described the austerity measures as unconstitutional.


If enforced, the court decision will throw a wrench in the fiscal progress Greece has made since narrowly avoiding bankruptcy by adding a burden of anywhere between €500m and €1bn on to the government's extremely tight budget.


That, say officials, would in effect wipe out the €800m primary budget surplus – before debt repayments – the government had hoped to post in 2013, its first in years. The data, which is not expected to be officially available until April, had been hailed as a major victory at a time when the unprecedented fiscal consolidation Greece has achieved is having an ever greater toll on society at large. Athens' fragile two-party coalition had promised that at least 70% of the surplus would be used to redress cuts and benefit losses imposed on pensioners and other Greeks worst hit by the crisis.


"The government has very little room for manoeuvre and the verdict poses one more problem," said Paschos Mandravelis, a political commentator. "Things are so tight, the situation is still so critical that if this now meant more measures it could easily fall."


On Sunday night, as officials scrambled to locate the extra monies, the court signalled it was considering appeals from social security funds and other civil servants on similar salary regimes to the armed forces, including university professors.


"If that is the case and it is extended to other public sector employees it will be hugely significant," Giorgos Stathakis, shadow development minister with the main opposition radical left Syriza party told the Guardian.


"At this point in time the funds could only come from the primary surplus but Greece is also facing a fiscal gap in 2014 and that makes things more difficult still.


"The 2014 budget is based on the assumption the economy will grow and so a great deal will depend on the recession."


Kickbacks from arms deals, believed to be in excess of €80m, could also used.


Tensions spawned by the court verdict have been further exacerbated by suggestions made by the EU monetary affairs commissioner Olli Rehn that Athens will have to wait until the summer for debt relief talks to begin. Greece had hoped to initiate the talks in the spring when it had official confirmation of its primary budget surplus.
Αναρτήθηκε από oko στις 12:00 π.μ.