FEB. 2, 2014
ATHENS — Encircled by a phalanx of riot police officers, members of Greece’s far-right party Golden Dawn announced the formation of a new political party late Saturday as a way to circumvent possible efforts by the government to outlaw the organization ahead of European elections.

As thousands of black-clad supporters chanted nationalist slogans at a rally near Parliament, Ilias Kasidiaris, Golden Dawn’s spokesman, said the new party, to be called National Dawn, could replace Golden Dawn to allow its candidates to run in elections to be held in May to select mayors and members of the European Parliament.

The rebranding appeared to be a maneuver to outflank the Greek government’s efforts to put a lid on Golden Dawn. Last year, the authorities conducted an extraordinary crackdown on the party, arresting five members of Parliament, including the leader of the group, and nearly 20 other people, after the murder of an antifascist rapper by a Golden Dawn supporter. 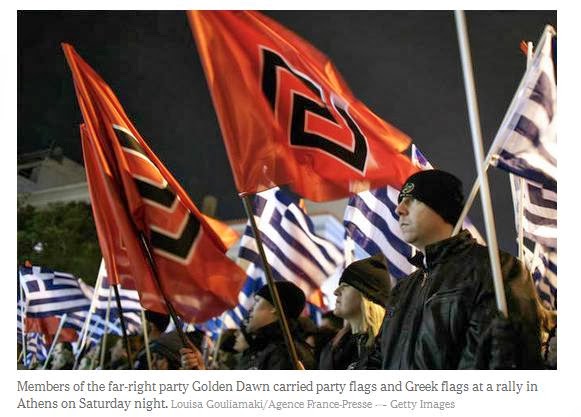 While the government cannot ban political parties, it has sought to dampen Golden Dawn’s influence by labeling the party a criminal organization. Five of the organization’s top members are still behind bars, but the appeal of the party, which espouses nationalistic and xenophobic stances, has not wavered.

National Dawn would be a “clean” party of “Greek nationalists who have not been involved in criminal organizations, who have no criminal record,” Mr. Kasidiaris told the crowd, sarcastically referring to his jailed colleagues. His remarks drew cheers from members who waved Greek flags and the party’s own signature red flag, which uses a symbol that resembles a swastika.

“They put us in jail. But did we falter? No, we did not,” said Mr. Kasidiaris, who has said he intends to run for mayor of Athens in May. “We are stronger, we are more powerful, and in a short time we will be in power.”

Throngs of police officers blocked streets with buses in a bid to prevent bloody clashes as hundreds of antifascist youths — many concealing their faces with black masks — gathered a quarter of a mile away in Syntagma Square wielding batons and rocks, and spoiling for a fight.

“We are here to put a stop to them,” said a man calling himself Kostas, as police officers ran to break up a tussle between youths who had charged a man carrying a Greek flag.
The killing in September of Pavlos Fyssas, an antifascist rapper, by a Golden Dawn supporter inflamed tensions and set off a wave of retaliatory activity between the groups.

In November, two Golden Dawn members were shot and killed near their party’s offices by leftist assailants calling themselves the Militant People’s Revolutionary Forces. Then, a week ago, scores of Golden Dawn activists converged on the site of Mr. Fyssas’ murder, ripping down a makeshift shrine and covering spray-painted messages about him with Golden Dawn’s insignia. 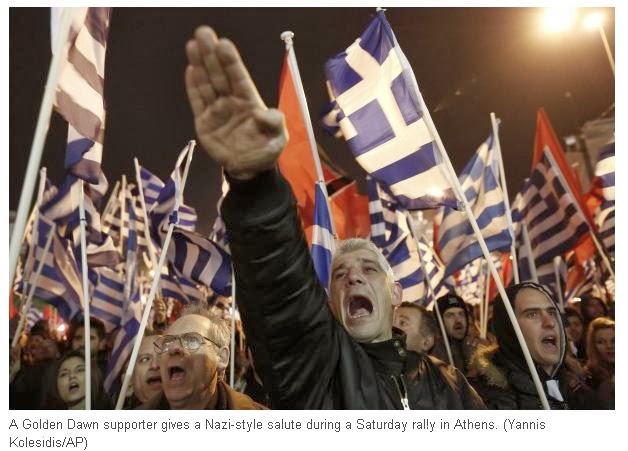 But Golden Dawn has retained its standing in political polls. A poll conducted late last month showed that if parliamentary elections were held today, it would be the third most popular party in Greece, with 10 percent of the vote. It trailed the leftist anti-austerity Syriza group, which would attract about 32 percent of the vote, and New Democracy, the party of Prime Minister Antonis Samaras, which was favored by 28 percent of respondents, according to the polling organization Public Issue.

Despite signs that Greece may be turning a corner after a five-year recession, Mr. Samaras’s fragile government coalition is facing a mounting challenge from both Syriza and Golden Dawn, who have strengthened their appeal with austerity-weary Greek voters. Greece’s central bank recently warned that political uncertainty posed one of the biggest threats to the recovery.

Mr. Samaras has taken pains to assure his European partners that the government will not fall apart. But he has also warned of the trouble that could arise in Greece and other euro zone countries if further austerity increases the appeal of extremist groups.

Golden Dawn’s appeal is partly explained by its promises to restore jobs and order. With the jobless rate continuing to climb — it hit 27.8 percent in October, and youth unemployment neared 60 percent — the organization has increased food distribution to Greeks in areas where there are a large number of unemployed immigrants.

After Mr. Fyssas’ killing, Nikos Michaloliakos, Golden Dawn’s leader and a member of Parliament, and four of his deputies remain in jail. All five lawmakers are charged with forming a criminal organization The Council of Europe’s human rights commissioner has described the group as a “neo-Nazi and violent political party” and urged that it be banned.

Since the Greek Constitution does not allow political parties to be banned, the government has resorted to other measures to restrict it, including beginning the criminal investigations and revoking its state funding.


Rebranding Golden Dawn is a way to counter the government’s efforts. “We will participate in elections one way or another,” Mr. Kasidiaris said. “Patriots will have a party to vote for if they go ahead with the coup to ban Golden Dawn.”