Hard Times Leave Some Greek Car Owners With Nothing but Rust 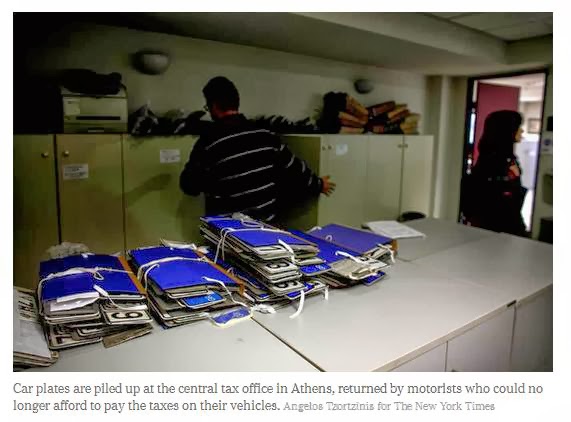 ATHENS — No longer able to pay for gas, Giannis Zgourakis parked his prized BMW on the street near his home and turned to a motorcycle. That was more than a year ago. Now, the car sits there a forlorn wreck, its battery dead, its tires ruined.

Mr. Zgourakis’s car is hardly the only one out there, though. Walk the streets of most residential neighborhoods in Athens, and it is easy to find parked cars, some late-model and under plastic covers, missing license plates and unattended.

Greeks have long had a love affair with cars, buying more of them per capita than many of their European neighbors. But these days, the country has become a vast graveyard of abandoned automobiles, one more measure of hard times.

In the last few days of 2013, so many people lined up to turn in their license plates in advance of a new tax on luxury cars that the government allowed the deadline to stretch into the new year, though officials have been unable to provide figures on how many plates were collected in 2013. Between November and January alone, about half of Greece’s districts collected roughly 130,000 license plates, according to Nikolaos Nikolopoulos, a member of Parliament who has been pressing the government for a more precise accounting.

Many gave up their plates with honest resignation, like Mr. Zgourakis, 36, who hopes to rescue his BMW sometime in the future when he will have more money. “I like to think that it is just sleeping,” he says.
But others keep driving, turning to counterfeit license plates or going without plates and skulking around back streets. Some do this out of need. But not all. A few months ago, the traffic police caught a former transportation minister driving his luxury sport utility vehicle through a stop sign in the seaside town of Loutsa outside of Athens.

It turned out that the former minister, Michalis Liapis, was driving with fake plates and no insurance, which infuriated many struggling Greeks.

“I am a pensioner, and I, too, have been affected by the crisis,” he told reporters on the way to the prosecutor’s office, prompting various news organizations to begin calculating Mr. Liapis’s net worth, which appears substantial. A mock “Free Liapis” Twitter campaign sprang up, and the former minister was jeered as he came to court in December.

Others, however, saw good news in the mere fact of Mr. Liapis’s arrest. “It is a sign that things are changing,” said Spiros Poulimenos, 62, a recently retired teacher who was taking in the sun in the working-class Keramikos neighborhood of Athens. “In the old days, the police would never have touched an official like that.”

Mr. Poulimenos was sitting in front of a boarded-up store, a late-model Porsche without plates parked at the curb in front of him. “There was a lady who parked it here this morning and took the subway,” he said with a shrug. “Does this shock you? I know people driving around with fake plates. Everybody does.”

Government officials say they are trying to crack down on unregistered cars, and even more on people who register their cars but fail to get insurance, another way of saving money. But a new computer system that would make crosschecks possible is not up and running yet.

Traffic officials say that 74,081 violations were issued regarding uninsured vehicles last year, up from 72,930 the year before. Earlier figures are not available, and the department does not keep track of the number of vehicles stopped with counterfeit plates.

But leaked reports of a government survey indicate that as many as 800,000 cars are uninsured. Greeks have always cheated on insurance, experts say. But in the past, their uninsured vehicles were mostly a second or third car stashed away in a country village and rarely used.

Nowadays “we fear this is also true for their primary vehicle,” says Konstantinos Bertsias, a spokesman for the Hellenic Association of Insurance Companies.

Emmanuel Koutsikos, a car insurance broker in Athens, says his business has declined 7 to 10 percent every year since 2010. Recently, he said, one wealthy client canceled the insurance on five vehicles. He told Mr. Koutsikos that he had a choice: He could keep the cars and fire 22 employees or get rid of the cars and fire only 20.
“What can you possibly say to that?” Mr. Koutsikos said with a sigh.

Sagging tires indicate that most of the unregistered cars never move. Mr. Zgourakis, who owns a solar panel installation company that is not doing much business these days, says that watching his car rot on the street has been hard. But he does not have the money to store or maintain it.

“I just didn’t need it anymore,” he said. “When we were installing, I needed the car to carry equipment. But now, since the business is only maintenance work, it is easy to carry a few tools on the motorcycle. It’s like 20 years ago. When I need a car now, I borrow my father’s.”

He does walk by his car once in a while to make sure that the police have not slapped a notice on his windshield warning that the vehicle is about to be towed. That has not happened yet, perhaps not surprisingly since budget cuts have left most ministries struggling just to take care of immediate needs. (Athens, for instance, recently laid off its entire police force, deciding to rely on the national police.)

Leaving a car parked for a long period of time in a place like Athens is likely to cause all kinds of damage to it, experts say. In the summer, when temperatures soar, the air inside a car gets even hotter, melting all the rubber caulking around the windows, for instance.

But selling a car here these days is not easy, and even people with expensive models would have to accept low prices because of the new taxes that can be as high as $7,700 a year for cars with very large engines.

Some Greek car dealers, however, have seen an opportunity. Instead of importing such cars, they now do the reverse, shipping used luxury cars out of the country to Germany and Saudi Arabia, according to George Pappas, a spokesman for Sarakakis, one of the largest car dealerships in Athens.

Before the economic crisis, Mr. Pappas said, about 280,000 cars were sold in Greece every year. Last year, that number dropped to 59,000. And people were interested only in cheaper models. Ninety percent of the cars sold were less than $33,000, he said.

“We used to have the second-highest ratio of Porsche Cayennes per capita in Europe,” Mr. Pappas said. “Now you never even see any of those cars.”