Greece can do without the 'sympathy' the IMF has shown Niger

In Niger, the IMF's loans have done more harm than good as ordinary people have had to pay the price for reckless lending 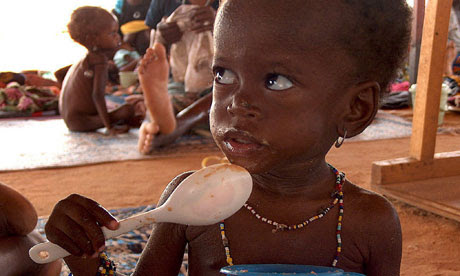 A malnourished child at an aid centre in Maradi, Niger, during a drought in 2005. Photograph: EPA

Christine Lagarde's crass comments on Greece have caused an understandable furore in that country. But in Niger, there must be just as much contempt for the IMF director. For in dismissing the plight of mothers in Greece, Lagarde also said she felt more sympathy for "the little kids from a school in a little village in Niger".
If "sympathy" is what characterises the IMF's approach to Niger, then Greece would do better to avoid it. Niger comes into news headlines on a fairly regular basis – associated as it is with cycles of famine and constantly high levels of malnutrition. Less reported is the role of the IMF, along with sister organisation the World Bank, in fuelling this suffering.
Niger was a victim of the IMF's now infamous Structural Adjustment Programme from 1982 and remains under an IMF programme to this day. As in Greece, the IMF loaned money to Niger to bail out Niger's creditors. Nothing was said as to how valid this debt was, an important question because it was under the military governments from 1974 that loans really started flowing.
Loans repaid debt and, as in Europe today, the ordinary people of Niger had to pay the price for reckless lending through austerity and a series of economic reforms. We get an indication of the impact of these policies by looking at agriculture.
Most people in Niger live off the land. The IMF and World Bank prioritise exporting as a vital means of earning foreign currency to repay debt. This is normally put into effect by ripping open the food sector to the volatility of international markets. Subsidised imported food floods in, destroying the suddenly unprotected agricultural sector.

Combined with austerity, such policies had a devastating impact. When food prices are low, the real impact can be masked. But when they rise, people realise all too quickly how vulnerable their food supply is. Djibo Bagna, president of the Peasant Association of Niger, believes structural adjustment ruined Nigerien agriculture: "Of course, when this sector involves 85% of the population, this has consequences: lower production, a rural exodus, growing slums."
Nor did a programme of austerity and liberalisation reduce debt levels – any more than it is doing in Greece. Niger's debts continued to rise from $960m when structural adjustment started, to $1.8bn in 1990, and then, after falling off a little, an all-time high of $2.1bn in 2003. More debt meant more control by the IMF, which meant more austerity and more reforms.

After many years, debt cancellation for Niger was seen, even by the IMF, as unavoidable. Debt relief allowed Niger to improve education and increase access to safe drinking water. But it came with strings. A 19% sales tax on basic foods and rapidly rising prices put food further out of the reach of ordinary people. The sale of emergency grain reserves, a policy that has already caused famine in Malawi in 2002, did further damage to the population's vulnerability.
These policies fed into the 2005 famine, a crisis caused not primarily by natural catastrophe – food was available but unaffordable – but by an appalling set of policy decisions. Even during a crisis there was no let-up in economic dogma. The IMF told the Niger government not to distribute free food to those most in need. Today's so-called "tough love" to Greece is nothing new.
Lagarde says: "It's sometimes harder to tell the government of low-income countries… to actually strengthen the budget and reduce the deficit." Hard but not impossible it seems, despite the impact it has had on poverty and inequality time and again.

The desperate impact of IMF policies on Niger has not even achieved the purported chief objective of the IMF – to control debt. In a Jubilee report released last week, we found that 10 years after debt cancellation, Niger's debt payments as a proportion of government revenue are projected to be the same level as they were before cancellation. IMF attempts to "restructure" Niger have failed even in these terms.
To pretend that the IMF operated in a somehow kinder way towards Niger than it is doing in Greece stands up to no scrutiny whatever. The IMF's policies cannot assist countries in crisis. Greece can learn from this – and has little to gain from Lagarde's "sympathy